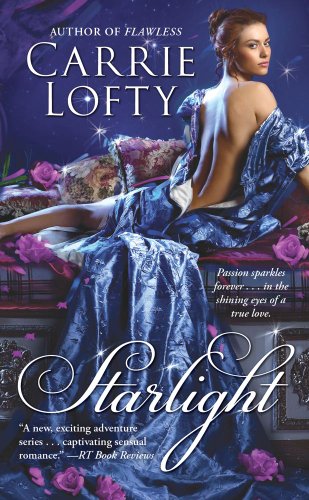 Passion sparkles forever in the shining eyes of a true love.

Sir William Christie, ruthless tycoon and notorious ladies' man, is dead. Now his four grown children have gathered for the reading of his will. What lies in store for stepsiblings Vivienne, Alexander, and twins Gareth and Gwyneth? Stunning challenges that will test their fortitude across a royal empire . . . and lead them to the marvelously passionate adventures of their lives.

An esteemed astronomer, Alex Christie, the eldest and most steadfast of the Christie siblings, has never possessed his late father's ruthless business drive. But to protect his frail infant son from his cruel father-in-law's bid for custody, the young widower must undertake Sir William Christie's posthumous million-dollar challenge: to make a Glasgow cotton mill profitable. At sea in an industrial world of sabotage and union agitation, Alex meets Polly Gowan, daughter of a famed union leader, who hopes to seize a mysterious saboteur without involving the police.

Because a sympathetic mill master would aid her cause, Polly becomes Alex's guide to urban Scotland. From soccer games to pub brawls, Alex sees another side of life, and feels free for the first time to reveal the man--vital and strong--behind his intellectual exterior. Polly is utterly seduced. Their ambitions, however, remain at odds: Alex vows to earn the mill bonus to save his child, while Polly fights for the needs of her people. Is there strength enough in their sparkling passion to bind them together in their quests-- and in a lasting love that conquers all?