Showing Once Upon a Car: The Fall and Resurrection of America's Big Three Automakers--GM, Ford, and Chrysler by Bill Vlasic 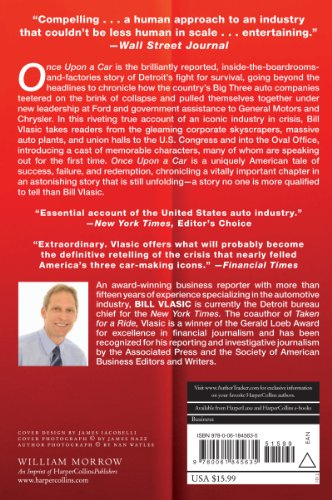 "Once Upon a Car" is the brilliantly reported, inside-the-boardrooms-and-factories story of Detroit's fight for survival, going beyond the headlines to chronicle how the country's Big Three auto companies teetered on the brink of collapse and pulled themselves together under new leadership at Ford and government assistance to General Motors and Chrysler. In this riveting true account of an iconic industry in crisis, Bill Vlasic takes readers from the gleaming corporate skyscrapers, massive auto plants, and union halls to the U.S. Congress and into the Oval Office, introducing a cast of memorable characters, many of whom are speaking out for the first time. "Once Upon a Car" is a uniquely American tale of success, failure, and redemption, chronicling a vitally important chapter in an astonishing story that is still unfolding--a story no one is more qualified to tell than Bill Vlasic.