Showing Ask Me If I'm Happy by Kimberly Menozzi 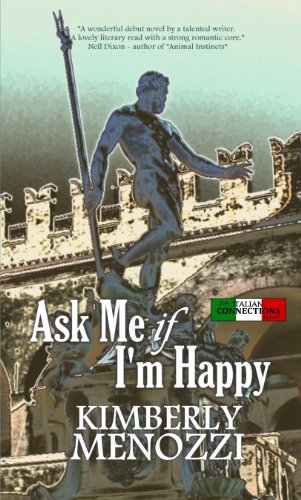 "A wonderful debut novel by a talented writer. A lovely literary read with a strong romantic core." -- Nell Dixon, author of "Animal Instincts"

"I read the last 75 pages holding my breath. I thoroughly enjoyed this novel." -- Christopher Allen, award-winning author and editor of the literary e-zine Metazen

"This is an absolutely beautiful book, a seamless blending of romance and literary fiction." -- Cameron Chapman, author of "Hold My Hand"

Sometimes the simplest questions are the hardest ones to ask.

Emily Miller is forced to spend a day in Bologna when she'd rather be catching her flight to the US. Determined to put ten years in Italy and her marriage behind her, she wants to have nothing to do with anything – or anyone – Italian ever again.

For Davide Magnani, chivalry isn't yet dead. He accompanies Emily to Milan, if only to reassure himself of her safe arrival. The following morning, he's stunned to realize he's fallen in love with someone he's only known for twenty-four hours – and it seems that she feels the same way.

One year later, Emily and Davide reunite. As their relationship strengthens, unforeseen events reveal deeper, troubling connections all around, which drive Emily away from the first man she's ever really trusted. Can she forgive the lies she's been told, or the truths which have been hidden from her? And how can Davide prove to her, once and for all, that Italy is precisely where she needs to be?

(This book was originally published by Diiarts Publishing in 2010.)