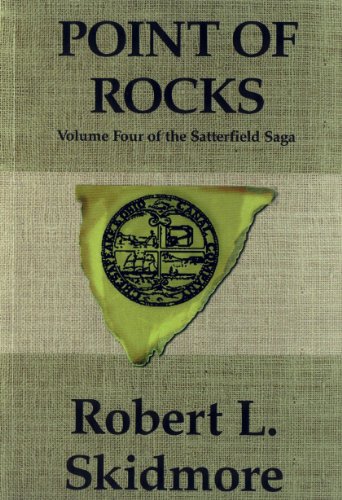 Point of Rocks features the Satterfield family of Alexandria, Virginia, as participants in the bitter 1820-1840 competition between the Chesapeake and Ohio Canal Company and the Baltimore and Ohio Railroad. Goaded by the success of the Erie Canal in New York State, a group of ruthless and adventurous Baltimore investment bankers fund the construction of the B & O Railroad in an effort to secure for themselves and their Chesapeake Bay shipping companies the potentially lucrative trade with the Ohio headwaters. Fearing that the construction of the country's first major railroad would isolate them from this trade with the nascent nation's heartland, the merchants of Georgetown and Alexandria on the Potomac River unite to build a canal that had long been George Washington's dream. The bitter race westward begins on July 4th, 1828, with President John Quincy Adams turning the first shovel of dirt for the canal and with Charles Carroll, the last living signer of the Declaration of Independence, presiding over the railroad's festive inauguration. These two events herald the commencement of a rivalry which brings violence, death, political machination, grief and exhilaration in its wake.