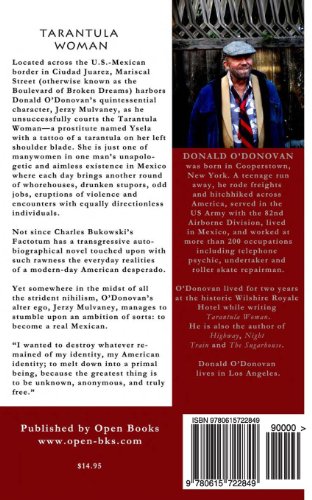 Located across the U.S.-Mexican border in Ciudad Juarez, Mariscal Street (otherwise known as the Boulevard of Broken Dreams) harbors Donald O'Donovan's quintessential character, Jerzy Mulvaney, as he unsuccessfully courts the Tarantula Woman-a prostitute named Ysela with a tattoo of a tarantula on her left shoulder blade. She is just one of many women in one man's unapologetic and aimless existence in Mexico where each day brings another round of whorehouses, drunken stupors, odd jobs, eruptions of violence and encounters with equally directionless individuals. Not since Charles Bukowski's Factotum has a transgressive autobiographical novel touched upon with such rawness the everyday realities of a modern-day American desperado. Yet somewhere in the midst of all the strident nihilism, O'Donovan's alter ego, Jerzy Mulvaney, manages to stumble upon an ambition of sorts: to become a real Mexican. "I wanted to destroy whatever remained of my identity, my American identity; to melt down into a primal being, because the greatest thing is to be unknown, anonymous, and truly free." Rather than a work of fiction, Tarantula Woman is a refreshingly honest document that subtly addresses such essential subjects as life, love, death and the challenge of simply being.