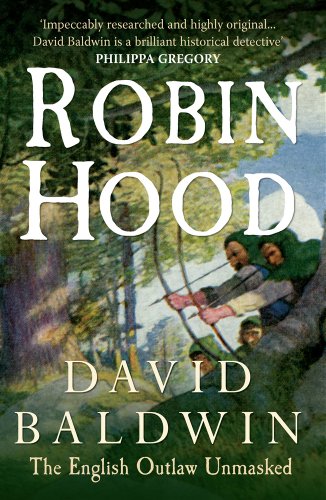 REVIEWS
'Impeccably researched and highly original - David Baldwin is a brilliant historical detective' PHILIPPA GREGORY, author of THE OTHER BOLEYN GIRL and THE WHITE QUEEN 'Unmasks Robin of Leicester' NOTTINGHAM POST 'Claims one Roger Godberd was the closest England had to a real Hood - David Baldwin argues the sheer number of references to Godberd in contemporary documents that he was known and feared across much of England' THE DAILY MAIL

The identity of Robin Hood is one of the great historical mysteries of English history - until now. Everyone has heard of Robin Hood, the brilliant archer who 'robbed the rich to give to the poor' and who always triumphed over the forces of evil, but the man behind the legend is as mysterious as King Arthur. There were outlaws who lived in the royal forests preying on unwary travelers, and Robin Hoods whose names are recorded in historical documents: but no one has been able to prove that one of these real Robins was the individual whose exploits were commemorated in ballad and song. David Baldwin sets out to find the real Robin Hood, looking for clues in the earliest ballads and in official and legal documents of the thirteenth and fourteenth centuries. His search takes him to the troubled reign of King Henry III, his conclusions turn history on its head and David Baldwin reveals the name of the man who inspired the tales of Robin Hood.