Showing Spring in Sicily: Food from an Ancient Island by Manuela Darling-Gansser 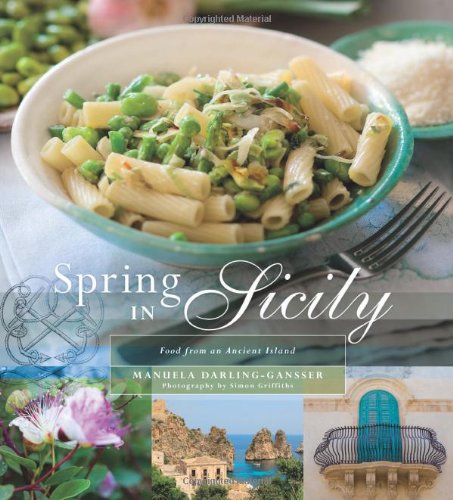 Spring in Sicily is a magical season of abundant growth and fertility. Fruit trees and vines are in new leaf, wheat fields stretch to the horizon, wild flowers grow in profusion along the roadside and, at sea, tuna and swordfish swarm in anticipation of their annual migration. It is the perfect time to travel to Sicily and uncover its secrets. Although small, Sicily has a big reputation and a colourful history. Its prized position on the Mediterranean trade route has rewarded Sicily with centuries of invasion and the influence of its conquerors is still evident in its architecture, cuisine and daily life. From the glittering Palermo of princes and palazzos to humble seaside bars, from the derelict and forgotten island of Salina to vineyards thriving on the rich slopes OF Mount Etna, Manuela Darling-Gansser's Sicilian journey reveals the real Sicily behind the myths and stereotypes. Like its landscape, Sicily's food is one of contrasts -- rich Arab spices, exquisite mild ricotta, hearty pasta, decadent desserts, and plenty of fresh fish, oranges, lemons and pistachios. And all Sicilians would agree, the best food is cooked at home.Drawn from the best of Sicilian cuisine, Manuela's recipes are always tempting and make it easy to introduce the flavours of Sicily into your home. The fourth of Manuela's seasonal journeys, Spring in Sicily is a lavishly illustrated and highly evocative journey to the heart of this unique island.