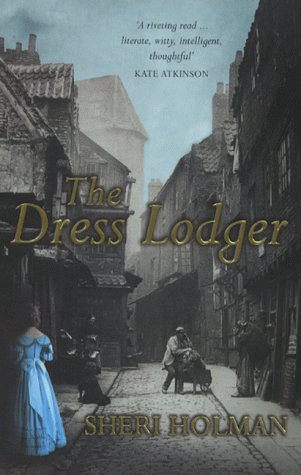 The Dress Lodger, a prostitute's passion for her vulnerable baby and the disgraced doctor who might save him, is engrossing historical fiction. As with all the best fictional history, Sheri Holman's atmospheric, miasmic tale of cholera-struck Sunderland in 1831 is based on fact. "Grave: A place where the dead are laid to await the coming of the medical student": this epigraph casts the novel's thematic lodestone, steering the reader into a deathly plot pursued through streets emanating the sounds, insufferable smells, humour, adversities and disease of an early 19th-century industrial town.

Gustine--the dress lodger--is a potter's assistant by day, sex worker by night. Her overbearing pimp and landlord has her permanently shadowed by the indefatigable, mysterious old woman known only as Eye to guard his investment in the startling blue dress in which she rents herself, explaining that: "dress lodging works on this basic principle: a cheap whore is given a fancy dress as a higher class of prostitute, the higher the station of the clientèle; the higher the station, the higher the price." Gustine's dress beckons a high-class punter pursued by a dubious fallen past in the figure of Dr Henry Chiver, an ambitious young surgeon who has fled Edinburgh to escape the professional scandal attending on his implication in the convictions of infamous pioneer anatomists Burke and Hare for murder and graverobbing. The heart is the favourite organ, "the singular fascination of his life", for Henry Chiver, desperate to re-establish his tarnished reputation through medical discovery. For this, and his paying students restless for induction into the arts of the scalpel, Chiver requires dead bodies for dissection, to the horror of his naïve, philanthropic fiancée Audrey Place. But it is 1831: the Anatomy Act has yet to pass through parliament to enable medics to legally obtain the corpses so critical to their accurate practice, and a suspicious public is terrifying itself with stories of murderous "burkers".

Streetsmart Gustine, "a rented self", hostile pragmatist trapped in unrelenting poverty, is all heart for her nameless little son who wears--literally--his heart on the outside, a rare case of ectopia cordis; just the kind of anatomical anomaly whose study would make the name of the aspirant but stigmatised Henry. Amid the gathering momentum of cholera epidemic, the two strike up a fatal pact: life for Gustine's son in exchange for a fresh supply of dead bodies for Chiver's scientific dissection. With mordant Dickensian wit and Elizabeth Gaskell's deft touch for gutsy outcast women seizing control of their destiny, Holman carves out a richly imaginative adventure as incisive and gruesomely fascinating as a 19th-century operating theatre. --Rachel Holmes