Showing That Summer in Sicily: A Love Story by Marlena de Blasi 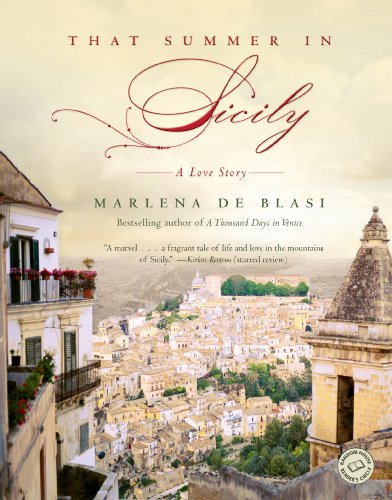 “At villa Donnafugata, long ago is never very far away,” writes bestselling author Marlena de Blasi of the magnificent if somewhat ruined castle in the mountains of Sicily that she finds, accidentally, one summer while traveling with her husband, Fernando. There de Blasi is befriended by Tosca, the patroness of the villa, an elegant and beautiful woman-of-a-certain-age who recounts her lifelong love story with the last prince of Sicily descended from the French nobles of Anjou.

Sicily is a land of contrasts: grandeur and poverty, beauty and sufferance, illusion and candor. In a luminous and tantalizing voice, That Summer in Sicily re-creates Tosca’s life, from her impoverished childhood to her fairy-tale adoption and initiation into the glittering life of the prince’s palace, to the dawning and recognition of mutual love. But when Prince Leo attempts to better the lives of his peasants, his defiance of the local Mafia’s grim will to maintain the historical imbalance between the haves and the have-nots costs him dearly.

The present-day narrative finds Tosca sharing her considerable inherited wealth with a harmonious society composed of many of the women–now widowed–who once worked the prince’s land alongside their husbands. How the Sicilian widows go about their tasks, care for one another, and celebrate the rituals of a humble, well-lived life is the heart of this book.

Showcasing the same writerly gifts that made bestsellers of A Thousand Days in Venice and A Thousand Days in Tuscany, That Summer in Sicily, and de Blasi’ s marvelous storytelling, remind us that in order to live a rich life, one must embrace both life’s sorrow and its beauty. Here is an epic drama that takes readers from Sicily’s remote mountains to chaotic post-war Palermo, from the intricacies of forbidden love to the havoc wreaked by Sicily’s eternally bewildering culture.