Showing Anybody but Justin by Shelli Stevens 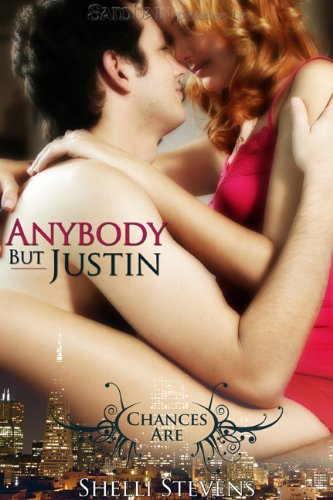 The line between friends and lovers can get a little blurry...especially when you add tequila.

A Chances Are story.

Gabby is serious about her search for Mr. Right, but no one can say she hasn't had a good time looking. She enjoys her numerous dates and the sex that comes with them. Until she finds herself falling for the one man she vows to never love. Her best friend and roommate, Justin. A player in every sense of the word--and a reminder of her awful past.

One night, with the help of a bottle of tequila, things get a little too hot for comfort. She moves out, intent on removing him from the line of temptation.

Justin has different plans. The tequila did more than just change how he sees his good friend. It made him realize he doesn't want to be just friends any more. He's ready for something more intimate, and he'll do whatever it takes to find out why she's running. And convince her to stay.

Warning: This book has hot sweet lovin' between friends who become lovers.


"Please don't tell me you're going to give me some crap line about how sleeping with me would be like sleeping with your brother?"

"No!" She laughed and some of the tension left her body at his ridiculous question. "I wouldn't have been all over you like white on rice a minute ago if I remotely had that brother vibe while kissing you."

A smug smile flitted across his face before he straightened it and cleared his throat.

"Okay, so what's the problem? Why don't you trust me?"

"Because I know how you are with women." She turned away and walked back into the kitchen. There was no way she would let him see the vulnerability she knew would be naked on her face. It was an effort to keep her words light. "You sleep with a woman for a few weeks...maybe even a month or two, and then it's over. You move on."

There was no response right away. Was he mad? Disappointed? She stared out the small window in the kitchen and drew her bottom lip between her teeth.

"I don't know why you're casting stones from a glass house," he finally said.
"In the two years we lived together, you never once had a long-term relationship."

"Maybe not," she admitted. "But there were a helluva lot more women passing through the house than men, Justin."

"Not that many more."

She turned, startled at the sudden tightness in his words. When she looked at him again, his expression had turned surly and his hands were shoved into his pockets.

"What, did you keep track or something?"

He didn't reply, which sent a wave of butterflies through her stomach. He wouldn't have kept tabs on the men she'd dated, would he? By all appearances, he'd barely noticed when she did date different guys.

"We're more alike than you think. I don't see how it could hurt to just see where this thing between us goes."

Why did he keep pressing? Her pulse sped up and she ran her tongue over her lips. No way. It was simply too crazy to contemplate.

Twice now Justin had touched her in a way that went beyond platonic. That was two times she'd gotten swept away on a rush of desire, but more so, had felt the tugging at her heart. Of wanting to let someone in. Lord, he already had one foot into the door of her heart, having been her best friend.

But Justin was not a man she could fall in love with. She just couldn't. It wouldn't end right at all.

The best-case scenario, she'd end up with a broken heart. The worst case...she'd end up like her mother.