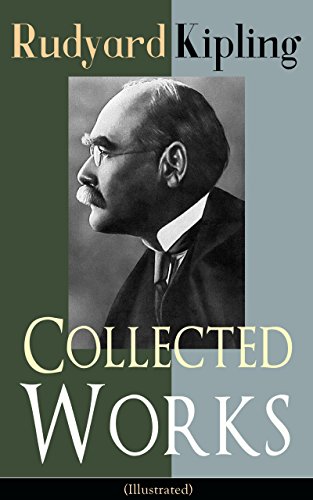 This carefully crafted ebook: “Collected Works of Rudyard Kipling (Illustrated)” is formatted for your eReader with a functional and detailed table of contents.
Table of Contents:
Novels:
The Light That Failed
Captain Courageous: A Story of the Grand Banks
Kim
The Naulahka: A Story of West and East
Stalky and Co.
Short Story Collections:
The City of Dreadful Night
Plain Tales from the Hills
Soldier's Three (The Story of the Gadsbys)
Soldier's Three - Part II
The Phantom 'Rickshaw and Other Ghost Stories
Under the Deodars
Wee Willie Winkie
Life's Handicap
Many Inventions
The Jungle Book
The Second Jungle Book
The Day's Work
Just So Stories
Traffics and Discoveries
Puck of Pook's Hill
Actions and Reactions
Abaft the Funnel
Rewards and Fairies
The Eyes of Asia
A Diversity of Creatures
Poetry Collections:
Departmental Ditties
Ballads and Barrack-Room Ballads
The Seven Seas
An Almanac of Twelve Sports
The Five Nations
Songs from Books
The Years Between
How Shakespeare Came to Write the 'Tempest'
Military Collections:
A Fleet in Being
France at War
The New Army in Training
Sea Warfare
The War in the Mountains
The Graves of the Fallen
Travel Collections
American Notes
From Sea to Sea
Letters of Travel: 1892 - 1913
Joseph Rudyard Kipling (1865-1936) was an English short-story writer, poet, and novelist. He wrote tales and poems of British soldiers in India and stories for children. He is regarded as a major innovator in the art of the short story; his children's books are classics of children's literature; and one critic described his work as exhibiting "a versatile and luminous narrative gift".