Showing The Summer of Ordinary Ways: A Memoir by Nicole Lea Helget 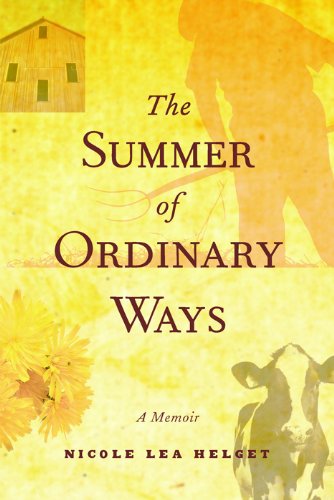 Practicing baseball with Dad, then watching him go after a cow with a pitchfork in a fit of rage. Playing chicken on the county road with semi trucks full of hogs. Flirting with the milkman. Chasing with your sisters after Wreck and Bump, mangy mutts who prowl farmsteads killing chickens and drinking fuel oil. Dandelion wine. The ghost of a girl buried alive over a century ago. These unforgettable, sometimes hilarious images spill from a fierce and wondrous childhood into the pages of The Summer of Ordinary Ways.Praise for The Summer of Ordinary Ways:"Helget's debut begins with a staggering example of her father's brutality, yet Helget refuses to succumb to a "woe is me" attitude, and she layers vignettes to create a lyrical story of growing up on a Minnesota farm in the 1980s, where her mother verges on insanity, her five unruly younger sisters get underfoot, and death is a familiar part of life. The memoir's charm lies in Helget's dulcet use of language; even as she describes the century-old death of a little girl accidentally buried alive, her words sing."--Publishers Weekly starred review "Beautifully crafted, each chapter a balanced and snug set piece with sentences as carefully constructed as a stone wall."--Kirkus Reviews"Helget breaks open the tough shell of family life to reveal a girlhood both tragic and lovely, with all its hidden violence, all its secret beauty."--Carolyn Parkhurst, author of The Dogs of Babel"Helget wrings intensity from the seemingly mundane--a family farm, the kitchen, a sleepy Midwestern town--to recreate a past that lives on somewhere between a dream and a nightmare. In The Summer of Ordinary Ways, every detail is authentic and resonant, every moment feels lived. Helget's debut is nothing short of remarkable."--Rosellen Brown, author of Tender Mercies "Marvelous, vibrant, and full of gritty energy, carrying the reader on a breathless ride across hills and valleys of pain, humor, and redemption."--Faith Sullivan, author of The Cape Ann"Written with blistering beauty, this fierce memoir is an elegy for broken spirits--human and animal--and a prayer for those able to face their past."--Bart Schneider, author of Beautiful Inez