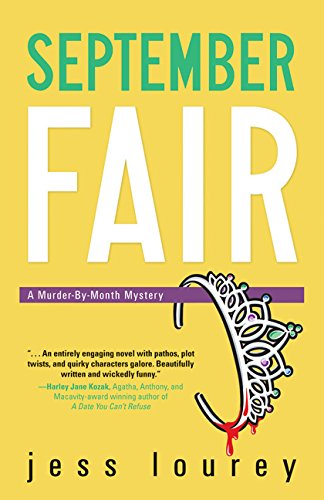 "Move over Janet Evanovich-mystery fans have a new reason to celebrate! September Fair is fun, funny, and so cleverly written, you'll be guessing until the very end." —Gemma Halliday, best-selling author of
Mayhem in High Heels

The Minnesota State Fair-the beloved home of 4H exhibits, Midway rides, and everything on a stick. The festival fun is riding high until the recently crowned Milkfed Mary, Queen of the Dairy, a Battle Lake native, is brutally murdered while her regal likeness is carved in butter. Can Mira James, covering the fair for the Battle Lake Recall, expose a deadly State Fair secret and win a blue ribbon for caging a killer? You bet your last deep-fried Nut Goodie!

"Another amusing tale set in the town full of over-the-top zanies who've endeared themselves to the engaging Mira."—Kirkus