Showing An Eye for an Eye by Irene Hannon 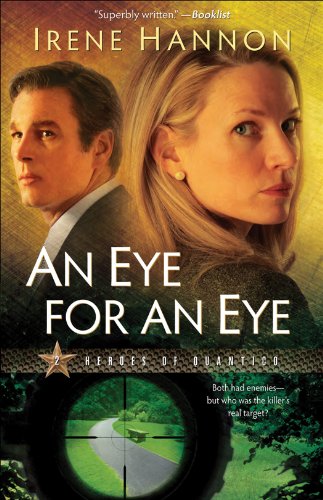 Can their relationship survive a killer with vengeance in his heart?

After an accidental shooting during a tense standoff, FBI Hostage Rescue Team member Mark Sanders is sent to St. Louis to work as a field agent and get his bearings while the bad press settles. Just weeks away from returning to Quantico, Mark has a chance encounter with his first love, Emily Lawson. But their reunion is cut short by a sniper. Now Mark must find the shooter before he strikes again. But what is his motive--and who was his intended target? Can Mark put the pieces together, keep Emily safe, and rekindle a relationship at the same time?

A fast-paced tale of romance, suspense, and intrigue, An Eye for an Eye is the exciting second book in the Heroes of Quantico series.


What people are saying about Irene Hannon and the Heroes of Quantico:

"I found someone who writes romantic suspense better than I do."--Dee Henderson


Irene Hannon is the author of more than thirty novels, including the bestselling Against All Odds. Her books have been honored with the coveted RITA® Award from Romance Writers of America, the HOLT Medallion, and the Reviewer's Choice Award from Romantic Times BOOKreviews magazine. Irene and her husband make their home in Missouri. For more information about Irene and her books, visit her website at www.irenehannon.com.