Showing The Western Front 1917-1918: From Vimy Ridge to Amiens and the Armistice (World War I) by Andrew Wiest 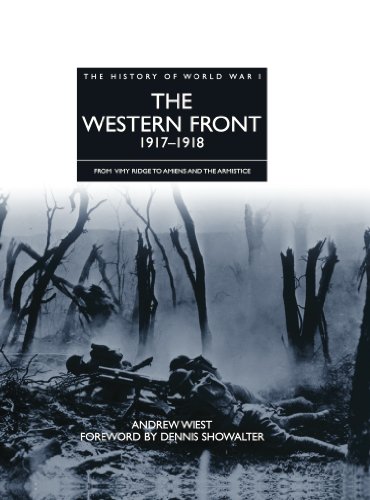 Following the climactic battles of Verdun and the Somme the previous year, the Allies sought to finish the war on the Western Front in 1917 through a major French offensive designed to rupture the German front and roll up their position. This attack was to be supported by a diversionary British offensive at Arras in the north, which would draw off both German attention and their reserves.

In the event, the French offensive in Champagne failed to deliver the promised breakthrough, leaving the French Army in a state of open mutiny. While French discipline recovered, the British Expeditionary Force took on the burden of the bulk of the fighting for the rest of the year. The need for an Allied offensive to take the pressure off the French resulted in the Third Battle of Ypres, more commonly known as Passchendaele.

The battle degenerated into a slaughter in the Flanders mud thanks to heavy rain, and the only rays of light for the Allies at the end of 1917 were the arrival of fresh American troops on the Western Front, and the potential for a decisive victory shown by the use of armour at the Battle of Cambrai. However the Russian Revolution brought the fighting on the Eastern Front to an end, releasing numerous battle-hardened divisions to reinforce the Germans in the west.

The year 1918 saw Germany launch her Spring Offensives, desperate attempts to defeat the Allies before the Americans could arrive in force. Although these assaults came close to breaking the Allied line, they eventually petered out in the face of determined resistance and over-extended supply lines.

Following the Battle of Amiens in August, the Allies pressed onwards: the British in Flanders, the French and the Americans in the Meuse-Argonne region. By September it was obvious that Germany was losing the war, and the decision was made to sue for peace before Allied troops reached German soil. The Armistice came into force at 11am on the morning of 11 November 1918, although the war did not officially end until the signing of the Treaty of Versailles in June 1919.

With the aid of over 300 black and white and colour photographs, complemented by full-colour maps, The Western Front 1917–1918 provides a detailed guide to the background and conduct of the conflict on the Western Front in the final years of World War I.