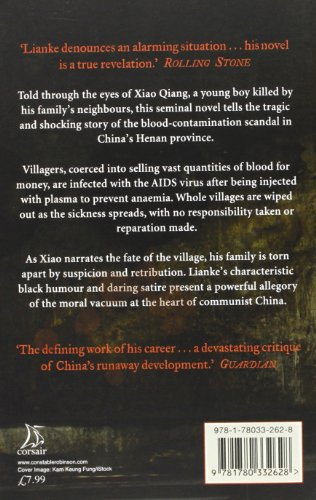 Told through the eyes of Xiao Qiang, a young boy killed by his family's neighbours, this seminal novel tells the tragic and shocking story of the blood-contamination scandal in China's Henan province. Villagers, coerced into selling vast quantities of blood for money, are infected with the AIDS virus when they're injected with plasma to prevent the onset of anaemia. Whole villages are wiped out as the sickness spreads, but no one takes responsibility for the epidemic and nothing is done to care for those left behind. As Xiao tells of the fate of his village, his family is torn apart by suspicion and retribution. This searing novel relates the tragedy of one village among many and the absurdity of a situation caused and perpetuated by the Chinese government. With black humour and biting satire, Yan Lianke's novel is a powerful allegory of the moral vacuum at the heart of Communist China, tracing the relentless destruction of a community. 'I come from the bottom of society. All my relatives live in Henan, one of the poorest areas of China. When I think of people's situation there, it is impossible not to feel angry and emotional. Anger and passion are the soul of my work.' Yan Lianke