Showing The Shimmer by David Morrell 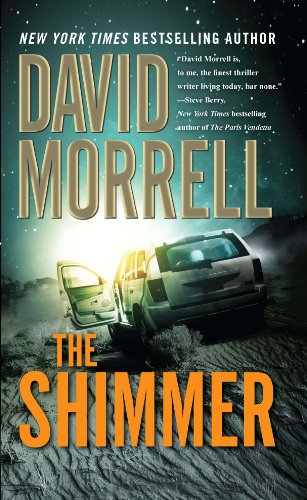 Since 1889, mysterious lights have appeared outside Rostov, a remote Texas town. Ranchers believed them to be the campfires of rustlers, but campfires don’t rise and fall, merge, and change colors.

In World War I, the locals believed that the lights came from German forces massing on the Mexican border. In the Second World War, the US military built an airfield there and used planes to try to discover the secret of the lights. In 1980, the entire town set out on a “Ghost Light Hunt.”

For more than a century, each attempt to get close to the lights met with horrifying results.

Now police officer Dan Page follows the trail of his missing wife from New Mexico to Texas and discovers that she and hundreds of spectators have become enraptured by the lights. After a crazed gunman fires obsessively into the crowd, the stage is set for more death.

To save his wife, Page must confront the mystery of the lights. His desperate search reveals a government conspiracy that dates back to World War II. The abandoned airfield is more than what it seems. So is a nearby observatory, with a purpose even more mysterious and lethal than the lights themselves.

Drawing his inspiration from the real-life Marfa lights, critically acclaimed Morrell packs The Shimmer with his trademark blend of action and terror.