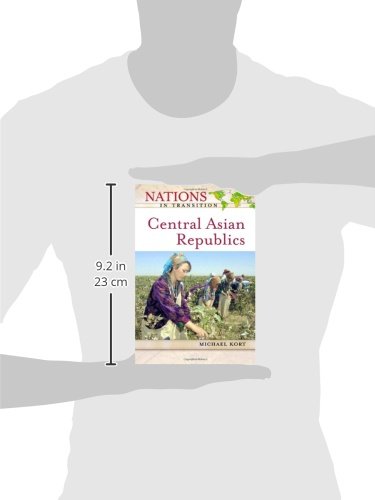 Published in 1994 in hardback, this is the 'Central Asian Republics' volume from the Nations in Transition series by Michael Kort, 200pp, ISBN 0816050740. The Nations in Transition series explores the independent governments formed after the fall of communism in Eastern Europe, the Balkans and Central Asia. The series is designed to give readers and researchers clear and thought-provoking portraits of each of these nations. Each volume surveys the history, culture, and political and social changes of the past few years and includes 25-35 photographs, a chronology of key events, easy-to-understand maps, and a further reading section. This new volume in the Nations in Transition series examines the problems confronting the five Central Asian Republics - Uzbekistan, Turkmenistan, Tajikistan, Kazakhstan, and Kyrgyzstan - as they adjust to their relatively new status as independent countries. With varying degrees of success and stability, the countries of this region are coping with a difficult transition. Famous historically for the great Silk Road, the area has recently drawn attention for its extensive energy reserves. The war in neighbouring Afghanistan and proximity and cultural ties to the rebels in Chechnya have added to the difficulties these countries face. Central Asian Republics is an excellent introduction to the history, culture, and current state of affairs in these countries. Following a brief introduction to the region, the book is divided into five sections, one representing each country. Each section is concise and informative, offering an overview that is easy to understand. The sections explore the geography, population, history, government, politics, economy, and daily life of each specific country and provide an outlook for the future. Contents: Introduction. Part 1. History. Part II: The Central Asian Republics Today: Kazakhstan; Uzbekistan; Turkmenistan; Kyrgyzstan; Tajikistan; Conclusion; Chronology; Further Reading; Index