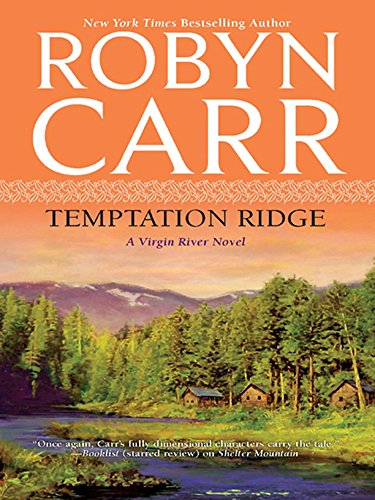 At twenty-five, after five years as her mother's caregiver, it's time for Shelby to experience freedom and adventure. Time for travel, college and romance.

But when she visits Virgin River, she runs into Luke Riordan, decidedly "not" whom she has in mind. A handsome Blackhawk pilot, Luke exited the army after twenty years, four wars and having been shot out of the sky three times. At thirty-eight he's tough and jaded. His major was in one-night stands, with a minor in commitment avoidance.

Technically, these two are all wrong for one another. But sometimes what you want and what you need are two different things…two very "good" things.

‘A touch of danger and suspense make the latest in Carr's Thunder Point series a powerful read.’ –RT Book Reviews on The Hero

‘With her trademark mixture of humor, realistic conflict, and razor-sharp insights, Carr brings Thunder Point to vivid life.’ –Library Journal on The Newcomer

‘No one can do small-town life like Carr.' –RT Book Reviews on The Wanderer

‘Strong conflict, humor and well-written characters are Carr's calling cards, and they're all present here… You won't want to put this one down.’ –RT Book Reviews on Angel's Peak

‘This story has everything: a courageous, outspoken heroine, a to-die-for hero and a plot that will touch readers' hearts on several different levels. Truly excellent.’ –RT Book Reviews on Forbidden Falls

‘Carr has hit her stride with this captivating series.’ –Library Journal on the Virgin River series

‘The Virgin River books are so compelling - I connected instantly with the characters and just wanted more and more and more.’ –#1 New York Times bestselling author Debbie Macomber