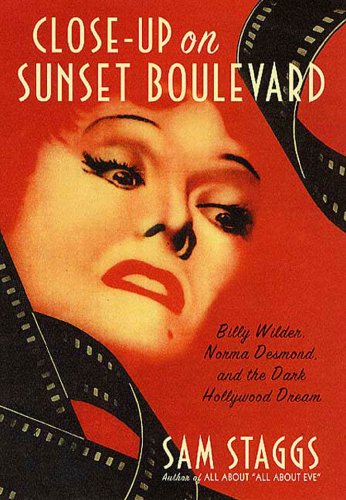 Billy Wilder's Sunset Boulevard, a classic film noir and also a damning dissection of the Hollywood dream factory, evokes the glamour and ruin of the stars who subsist on that dream. It's also one long in-joke about the movie industry and those who made it great-and who were, in turn, destroyed by it. One of the most critically admired films of the twentieth century, Sunset Boulevard is also famous as silent star Gloria Swanson's comeback picture.

Close-Up On Sunset Boulevard tells the story of this extravagant work, from the writing, casting and filming to the disastrous previews that made Paramount consider shelving it. It's about the writing team of Billy Wilder and Charles Brackett-sardonically called "the happiest couple in Hollywood"-and their raucous professional relationship. It's about the art direction and the sets, the costumes, the props, the lights and the cameras, and the personalities who used those tools to create a cinematic work of art.

Staggs goes behind the scenes to reveal: William Holden, endlessly attacked by his bitter wife and already drinking too much; Nancy Olson, the cheerful ingenue who had never heard of the great Gloria Swanson; the dark genius Erich von Stroheim; the once famous but long-forgotten "Waxworks"; and of course Swanson herself, who-just like Norma Desmond-had once been "the greatest star of them all."

But the story of Sunset Boulevard doesn't end with the movie's success and acclaim at its release in l950. There's much more, and Staggs layers this stylish book with fascinating detail, following the actors and Wilder into their post-Sunset careers and revealing Gloria Swanson's never-ending struggle to free herself from the clutches of Norma Desmond.

Close-Up On Sunset Boulevard also chronicles the making of Andrew Lloyd Webber's musical production of Sunset Boulevard and the explosive diva controversies that dogged it. The book ends with a shocking example of Hollywood life imitating Hollywood art. By the last page of this rich narrative, readers will conclude: We are those "wonderful people out there in the dark."