Showing An Island Away by Daniel Putkowski 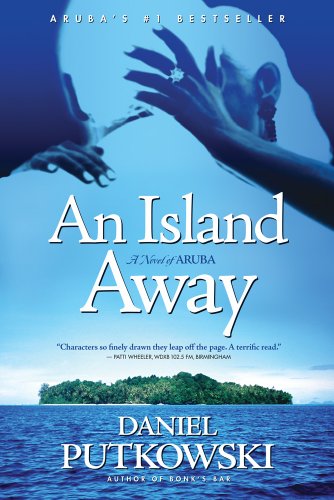 In Aruba, far from the sparkling beaches and glamorous hotels, lies a waning refinery boomtown of barroom brothels, flexible morality, and one tourist trap known as Charlie’s Bar. Luz, a young Colombian mother works as a prostitute to pay off her family’s debt. She encounters Sam, an American expatriate looking to perpetuate his flamboyant youth. Together they find Captain Nathan Beck, washed ashore and barely alive after his tugboat sinks in a storm. For each of them, San Nicolaas provides hope amid desperation as they live dangerously in pursuit of their dreams. Through it all, Charlie’s watchful eye sees the best and worst, knowing that on his desert island you have to improvise. ///// "Insightful tale of Aruba's refinery heyday. A great beach read!" (Susan Campbell, ARUBA NIGHTS MAGAZINE) ///// "Characters so finely drawn they leap off the page. A terrific read." (Patti Wheeler, WDXB 102.5 FM, Birmingham, AL) ///// "A no-holds-barred look at Aruba. A must-read for those who plan to visit." (Arthur D. Jensen, LAGO-COLONY.com) ///// "Reveals aspects of island life that few visitors ever know." (THE NEWS ARUBA SUNDAY EDITION) ///// "As the story unfolds, Putkowski makes one thing clear ... he is a keen observer of the human condition." (ARUBA.com)