Showing The Ghost of Freedom: A History of the Caucasus by Charles King 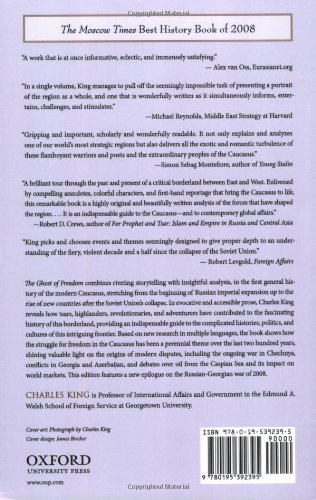 Named by Moscow Times "the History Book of the Year," The Ghost of Freedom combines riveting storytelling with insightful analysis, in the first general history of the modern Caucasus, stretching from the beginning of Russian imperial expansion up to the rise of new countries after the Soviet Union's collapse. In evocative and accessible prose, Charles King reveals how tsars, highlanders, revolutionaries, and adventurers have contributed to the fascinating history of this borderland, providing an indispensable guide to the complicated histories, politics, and cultures of this intriguing frontier. Based on new research in multiple languages, the book shows how the struggle for freedom in the Caucasus has been a perennial theme over the last two hundred years, shining valuable light on the origins of modern disputes, including the ongoing war in Chechnya, conflicts in Georgia and Azerbaijan, and debates over oil from the Caspian Sea and its impact on world markets. The paperback edition features new material, including an Afterword on the Russian-Georgian war of 2008.