Showing The Wagner Clan: The Saga of Germany's Most Illustrious and Infamous Family by Jonathan Carr 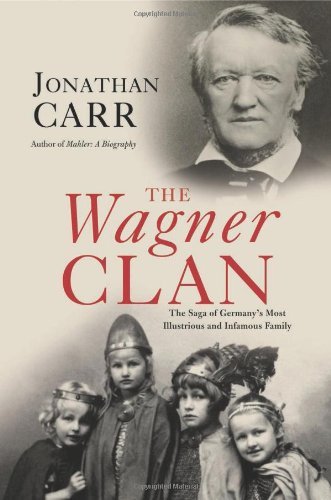 A family saga as riveting as any opera, and a matchless mirror of Germany’s rise, fall, and resurrection. Richard Wagner was many thingscomposer, philosopher, philanderer, failed revolutionary, and virulent anti-Semiteand his descendants have carried on his complex legacy. Now, in The Wagner Clan , biographer Jonathan Carr retraces the path of the renowned composer and his descendants. Along the way, Carr offers glimpses of Franz Liszt (whose illegitimate daughter Cosima married Wagner); Friedrich Nietzsche; Arthur Schopenhauer; Alberto Toscanini; Joseph Goebbels; Hermann Göring; and the Wolf” himself, Adolf Hitler, a passionate fan of the Master’s music and an adopted uncle to Wagner’s grandchildren. Wagner’s British-born daughter-in-law, Winifred, was a close friend of Hitler’s and seemed momentarily positioned to marry him after the death of her husband. All through the war the Bayreuth Festival, begun by the Master himself, was supported by Hitler, who had to fill out the meager audience with fighting men and SS officers. After the war, the festival was dark for a decade until Wagner’s offspringwith characteristic ambition and cunningrevived it.