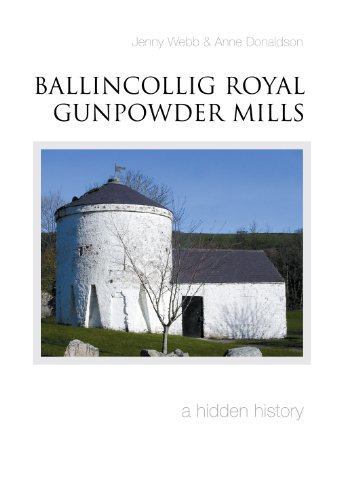 The Ballincollig Royal Gunpowder Mills in County Cork was first established in 1794 by a prominent Cork citizen, Charles Leslie. Eleven years later, when Napoleon's control of France posed a grave threat to Britain, the Board of Ordnance bought the mills and expanded the site, the layout of which is still visible today. By the mid-nineteenth century, Thomas Tobin of Liverpool had transformed the mills into one of the most up to date industrial complexes in Ireland, second only in importance to those at Waltham Abbey. Closed for over a century, the site has now become one of Ireland's most impressive regional parks covering an area of 130 acres of woodland, meadows and waterways. The many buildings formerly used in the manufacture of gunpowder are still scattered along the main canal which stretches for about a mile and a half along the southern bank of the River Lee. Visitors can explore the 'Hidden History' which lies within the Ballincollig Regional Park with the help of this guide which has a fine selection of period black and white photos and colour images together with a numbered map which identifies each building and its former use.