Showing Reaching Past the Wire: A Nurse at Abu Ghraib by Deanna Germain 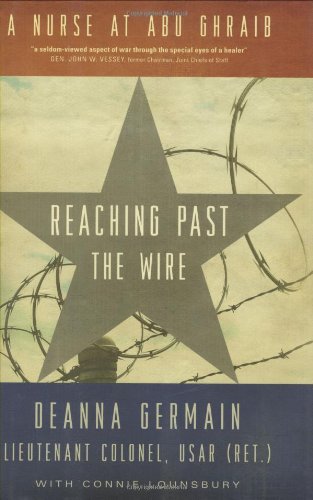 On a frigid afternoon in February 2003, Deanna Germain, a nurse practitioner and new grandmother living in Blaine, Minnesota, received the registered letter she had hoped would never arrive. In six days she was to report for active duty as war loomed in Iraq. The purpose of mobilization: "For Enduring Freedom." With startling detail, Lt. Col. Germain offers a clear-eyed account of life as a nursing supervisor behind the fortified gates of Abu Ghraib. Her duty: To treat Iraqi prisoners, U.S. soldiers, and Marines in need of medical attention. Shortly after she arrived, the notorious prison made headlines around the world for abuses that had stopped months before. Despite unbearable heat, frequent mortar attacks, medical supply shortages, substandard facilities, the relentless stench of war, and sleepless nights quartered in a tiny prison cell, Germain served the medical needs of each of her patients with remarkable humanity. In this crucible of wartime stress, workplace turmoil, and cultural uncertainty, Germain found herself forging powerful connections with colleagues and translators. She learned from translators about normal Iraqi families struggling to survive impossible conditions. And after vowing to avoid personal relationships with prisoners, she became a comfort to many. Duty and compassion, camaraderie and hope all helped to pull her through. Lt. Col. Deanna Germain, USAR (Ret.), is a nurse practitioner at a pain clinic near Minneapolis. Connie Lounsbury is a freelance writer who also teaches writing classes.