Showing The Medieval Churches of County Offaly by Elizabeth FitzPatrick 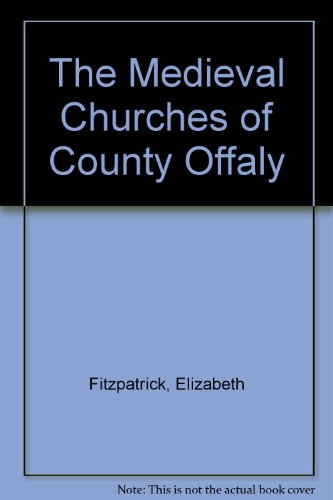 Fitzpatrick, Elizabeth / O'Brien, Caimin. The Medieval Churches of County Offaly. Survey conducted by Evelyn Cooley, Catherine Martin, Caimin O'Brien and David Sweetman. Ireland, Government of Ireland, 1998. 19,5 cm x 26 cm. XIV, 186 pages, 145 illustrations, 21 plates. Original Hardcover with original dustjacket in protective collector's mylar. Excellent condition with only minor signs of external wear. Includes the following chapters: Pre-Norman ecclesiastical foundations / Romanesque and transitional-style churches / Medieval reiligious houses / Later medieval parish churches and daughter-chapels. This handsomely illustrated book is the first detailed study of the medieval churches of an Irish county. In an intricate weaving of archaeological and historical evidence, it charts the development and decline of the ecclesiastical sites and church buildings of Offaly over a period of 1700 years. By concentrating on one region, the authors offer a unique perspective on religious life and building, against the backdrop of early Christianity, Anglo-Norman settlement, Gaelic revival, dissolution, war and plantation. What emerges is a precise cross-section of the fate of churches and religious houses elsewhere in Ireland, a method which represents an important new approach to the study of the Irish Church. Commencing with an account of some 32 pre-Norman church sites and monasteries, it travels into the splendid eccenticity of the Hiberno-Romanesque style in church architecture, and onwards in time to the foundation of Augustinian, Carmelite and Franciscan houses. It addresses the less well understood manorial churches of the late twelfth and early thirteenth centuries, the peculiar nature of parochial organisation in Offaly, and the form, fabric and fittings of unsophisticated parish churches and their daughter-chapels. Behind the careful assessment and reconstruction of architectural and archaeological detail lies..