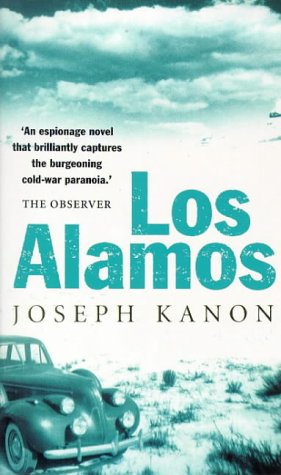 Joseph Kanon is a brave man; for his first novel, Los Alamos, he has chosen the Manhattan Project as a backdrop and Robert J. Oppenheimer as a central character. The year is 1945, and a group of scientists squirreled away in the New Mexico desert are in a frenzied race with the Nazis to finish the first atomic bomb. Inside the fence that surrounds Los Alamos, everything moves according to plan; outside, however, something has gone horribly wrong. A security guard is found murdered in a city park, possibly the victim of a deadly homosexual encounter. But the niggling question remains: is this merely a private tragedy or, more alarmingly, a governmental security breach? To answer that question, the military calls in Michael Connolly, an intelligence officer who quietly continues the slain man's investigation. Connolly's efforts are complicated by reluctant scientists, a local sheriff, and a love affair with Emma Pawlowski, the mysterious wife of one of Los Alamos' scientists.

Eventually, of course, the scientists complete their bomb and Michael Connolly gets his man. If the historically based scenes seem a little flat (what fiction, after all, can compete with the reality of that first mushroom cloud?), the mystery at the heart of Los Alamos is brisk and entertaining, and the moral questions it poses give you something to ponder once the killer is uncovered.