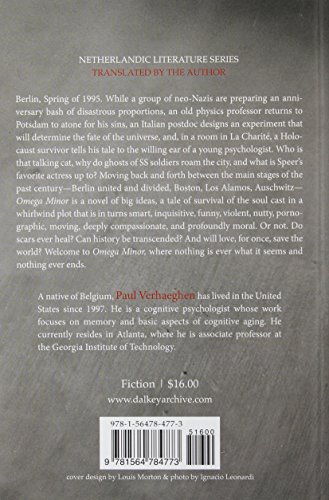 Berlin, Spring of 1995. While a group of neo-Nazis are preparing an anniversary bash of disastrous proportions, an old physics professor returns to Potsdam to atone for his sins, an Italian postdoc designs an experiment that will determine the fate of the universe, and, in a room at Le Charité, a Holocaust survivor tells his tale to the willing ear of a young psychologist. Who is that talking cat, why do ghosts of SS soldiers roam the city, and what is Speer's favorite actress up to?Moving back and forth between the main stages of the past century-Berlin united and divided, Boston, Los Alamos, Auschwitz-Omega Minor is a novel of big ideas, a tale of survival of the soul cast in a whirlwind plot that is in turns smart, inquisitive, funny, violent, nutty, pornographic, moving, deeply compassionate, and profoundly moral. Or not.Do scars ever heal? Can history be transcended? And will love, for once, save the world? Welcome to Omega Minor, where nothing is ever what it seems and nothing ever ends."It is an amazing book. Much contemporary American literature does not dare raise its head. It is domesticated. Verhaegen, on the other hand, takes on the whole 20th century in a single novel." -- Richard Powers"An overwhelming masterpiece about the madness of the twentieth century." --Frankfurter Allgemeine Zeitung"An event. Overwhelming and ingenious. From the first words on, the author's ambition sparkles on the page. Omega Minor holds the totality of the twentieth century in its grasp." -- De Morgen"A powerful, imposing novel. One of the rare literary works that instills deep gratitude in the reader. Omega Minoris the great novel that the twentieth century still owed us." -- De Standaard