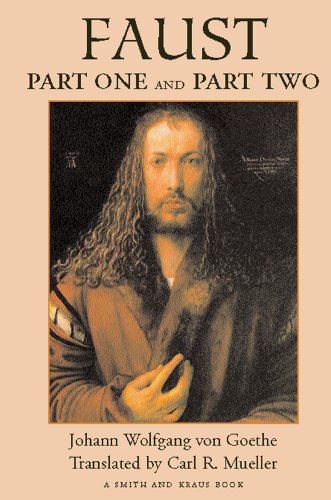 As much poem as it is play, Faust is the spiritual quest of a soul determined to explore the very nature of Reality, a revolutionary work that refuses to accept limitations, but, like Romanticism itself, embraces all, the natural world of everyday life, as well as the Great World of universal experience, the macrocosm as well as the microcosm. It records the journey of the feminine from its roots in the physical to the realm of Pure Idea, from animal to Eternal Feminine. Formation/Transformation is the road the play travels in its alchemical advance from base to exalted, from the unformed state to total individuation.

This major new translation is by Carl R. Mueller of the School of Theater, Film and Television, UCLA. Like his translations for Smith and Kraus of the complete Greek tragedies of Aeschylus, Sophokles and Euripides, his Faust seeks to create a text in English that renders this masterpiece of poetic world theater in a fresh, lively and contemporary guise both for the modern reader and the stage.

Author Bio: MUELLER, a professor of theater at UCLA, is currently at work with Hugh Denard of the University of Warwick (UK) on a complete translation of the nineteen plays of Euripides. Mueller has also translated volujmes of Schnitzler, Wedekind, Strindberg, von Kleist, Pirandello, Sophokles and Aeschylus for Smith and Kraus.