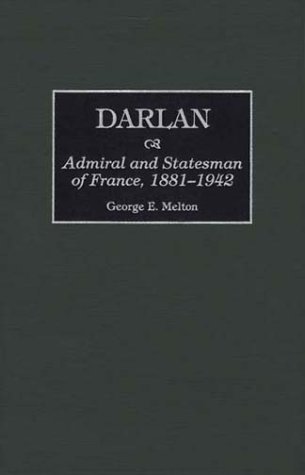 Admiral Jean François Darlan's Western legacy is that of an opportunist, a fascist collaborator, or, at worst, a traitor during France's struggle for survival in the early years of World War II. This study, however, based upon new research from French, English, and German archival sources, paints a different picture. With a career beginning during the height of France's imperial power and lasting until the nation's rapid wartime decline, Darlan was a pragmatic statesman, a guardian of naval preparedness, a stout opponent of fascism, an earnest patron of the Anglo-French Alliance, and an advocate of combined naval power in the Mediterranean. He defended French naval and colonial interests against all foreign powers before and during the war, and his success in this area eventually resulted in his assassination.

Darlan's career was characterized by his loyal service to his government and nation. One of the first to recognize the German threat, he openly favored naval rearmament in the early 1930s. He was also instrumental in the success of the 1937 Nyon Conference on Mediterranean security, which was the only prewar military effort against fascist aggression. During the occupation, Darlan pursued diplomacy to ease the burdens of the French people. Yet, these very negotiations with the Germans, along with his bitter reaction to Britain's surprise attack against the French fleet at Mers el-Kéebir, would result in his reputation as an opportunist and a collaborator with the fascists. This examination of the man whose murder would ease the way for Charles de Gaulle will captivate anyone interested in the political intrigues of World War II.