Showing A Memoir of the Warsaw Uprising by Miron Bialoszewski 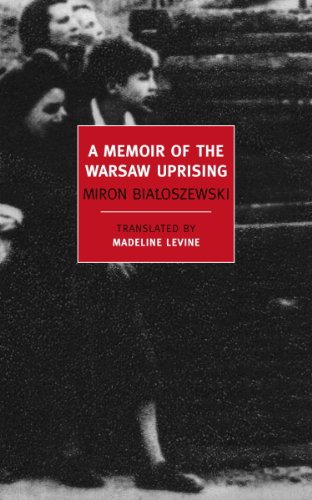 The great Polish poet Miron Białoszewski was twenty-two on August 1, 1944, when he went on an errand for his mother and ran into history. With Soviet forces on the outskirts of Warsaw, the city revolted against five years of Nazi occupation, an uprising that began in a spirit of heroic optimism but ended tragically sixty-three days later. The Nazis fought back ruthlessly, reducing Warsaw to rubble while slaughtering some 200,000 people, mostly through mass execution. The Red Army simply looked on.

Białoszewski’s blow-by-blow account of the Uprising brings it alive in all its desperate urgency. Here we are in the shoes of a young man slipping back and forth across German lines, dodging sniper bullets, collapsing with exhaustion, rescuing the wounded, burying the dead. An indispensable and unforgettable act of witness, A Memoir of the Warsaw Uprising is also a major work of literature. Białoszewski writes in short, stabbing, splintered, breathless sentences attuned to “the glaring identity of ‘now’.” His book displays a wild whiteknuckled poetry that resists the terrible destruction it records.