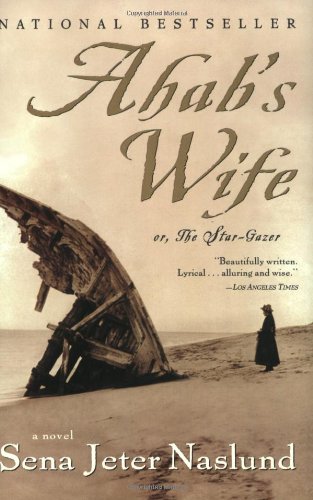 It has been said that one can see further only by standing on the shoulders of giants. Ahab's Wife, Sena Naslund's epic work of historical fiction, honours that aphorism, using Herman Melville's Moby-Dick as looking glass into early 19th-century America. Through the eye of an outsider, a woman, she suggests that New England life was broader and richer than Melville's manly world of men, ships and whales. This ambitious novel pays tribute to Melville, creating heroines from his lesser characters, and to America's literary heritage in general. Una, named for the heroine of Edmund Spenser's Faerie Queene, flees to the New England coast from Kentucky to escape her puritanical father and to pursue a more exalted life. She gets whaling out of her system early: going to sea at 16 disguised as a boy, Una has her ship sunk by her own monstrous whale, and survives a harrowing shipwreck:

I was so horrified by the whale's deliberate charge that I could not move. Then my own name flew up from below like a spear: "Una!" Giles' voice broke my trance, and I scrambled down the rigging. No sooner did my foot touch the deck than there was such a lurch that I fell to my face. I heard and felt the boards break below the waterline, the copper sheathing nothing but decorative foil. The whole ship shuddered. A death throe.

The ship dies, but Una returns to land to pursue the life of the mind. The novel's opening line--"Captain Ahab was neither my first husband nor my last"--also diminishes Melville's hero in the broader scheme of things. Naslund exposes the reader to the unsung, real-life heroes of Melville's world, including Margaret Fuller and her Boston salon, and Nantucket astronomer Maria Mitchell. There is a chance meeting with a veiled Nathaniel Hawthorne in the woods, and throughout the novel the story brims with references to the giants of literature: Shakespeare, Goethe, Coleridge, Keats, and Wordsworth. Although her novel runs long at nearly 700 pages, Naslund has created an imaginative, entertaining, and very impressive work. --Ted Leventhal