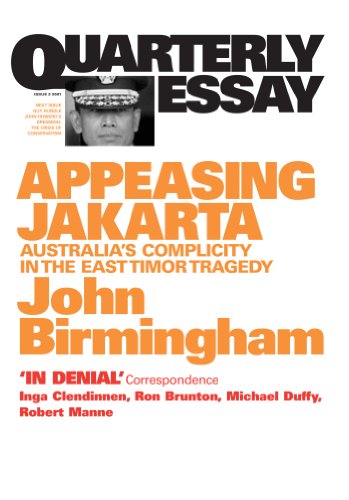 In the second Quarterly Essay, John Birmingham takes apart the folly of twenty-five years of Australian policy on East Timor. How did Gough Whitlam and Richard Woolcott in 1975 saddle this country with a policy that was bound to lead to the intervention of 1999? Why were shrewder voices ignored and why did we persist with an unworkable model? Where does this leave us with an Indonesia still dominated by the old power elites? And what was the tragedy like for the people of East Timor? John Birmingham has written a passionate narrative history of the East Timor question which never turns away from the slaughter and sorrow of the people who suffered it.

Appeasing Jakarta is an analysis of what happened in 1975 when we condoned Indonesia's intervention and what happened in 1999 when we stood against it ...John Birmingham is deadly in his disdain for the way a defunct paradigm...was clung to like a dogma...but [this] is also an essay about the human cost...written in flowing colours with a strong narrative streak and a swashbuckling power of dispatch... —Peter Craven, Introduction

It was a policy of wilful blindness, made possible only because we were always somewhere else when the trigger was pulled."" —John Birmingham, Appeasing Jakarta

John Birmingham’s books include the cult memoir He Died with a Felafel in His Hand, Leviathan: The Unauthorised Biography of Sydney and the fiction series Weapons of Choice. He is the author of two Quarterly Essays, Appeasing Jakarta: Australia’s Complicity in the East Timor Tragedy and A Time for War: Australia as a Military Power. He is a regular contributor to the Monthly.