Showing When All Goes Bright by Jess Mowry 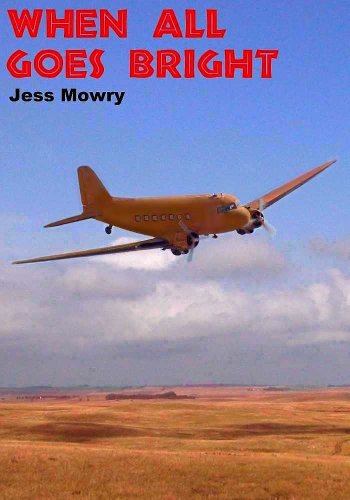 Not quite in the center of Africa lies a tiny land called Kiwanja whose people have lived in peace for many thousands of years. Though the British once colonized this land, it was never considered valuable enough to be brought into the 20th century and was finally granted its independence... though most of its people were unaware they had ever "belonged" to anyone. But, times have changed in the outside world; satellites spy on everyone because anything that isn't possessed is a threat to those who don't posses it. Flags are no longer planted on someone's beach to claim new lands for kings and queens, but other methods have been devised to make people slaves and steal their resources.

Thirteen-year-old Dakota is the son of Nathi, a Kiwanjian bush pilot who flies an ancient C47. Dakota is skilled in take-offs and landings from dirt airstrips in the dead of night, skimming hilltops to avoid radar, and dodging high-tech fighters. Dakota has only known war in his life, war in which children kill other children commanded by adult "generals." One side wants to rule the land to "bring it into the future," the other claims to be fighting for freedom and ancient traditional ways of life, but both bring only terror and death to the innocent people caught in the middle. Who started this war? Who profits from it? Dakota doesn't know. He packs an AK-47 and, with his father, smuggles weapons to the freedom fighters.

Meanwhile, in Houston, Texas, Nicole Neale, a divorced single-parent with an almost-thirteen-year-old son named Zack, fights a more civilized kind of war to hold her job with a small corporation that manufactures many things from kids' action-figures to military uniforms... though much of the work is done by children in dirty, third-world sweatshops. Except for encounters with road-rage on her daily commute, Nicole's enemies usually aren't violent, but they still lay mines in her road to success. Will winning her war in corporate boardrooms save her son Zack from what seems like enslavement to video games, material values, the lure of money, and possibly drugs? Except for a year in Africa as an idealistic teen in the Peace Corps, what can Nicole have in common with a Kiwanjian bush pilot and possible terrorist? How could her son, chubby, web-surfing Zack, relate to a war-hardened boy like Dakota?  And, why should an American corporation, subsidized by the U.S. Government, have any interest in a tiny African country? The only thing Nicole knows about Kiwanja is that its people make beautiful boots.