Showing A history of County Wexford by Nicholas Furlong 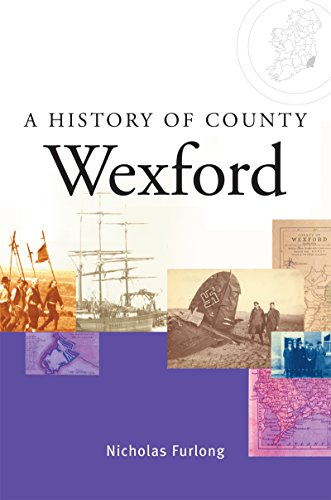 Brimming with vitality and information, Nicholas Furlong’s comprehensive A History of County Wexford is an indispensable guide to Wexford’s history, culture and people. Furlong starts with Wexford’s first settlement and tells the story of Wexford up to the present day, looking at its Gaelic origins, its turbulence during Cromwellian times and its pivotal role in 1798.

County Wexford lies in the south eastern corner of Ireland. It is bounded to the west by the River Barrow and the Blackstairs Mountains, to the north by the Wicklow Mountains and by the sea on the other two sides. The River Slaney flows diagonally through the centre, dividing the county north and south.

First settled seven thousand years ago, the county has hosted a variety of cultures from Celts to Vikings, Flemish and Normans to English. Historically, it maintained a social, confessional and ethnic mix of populations that was more varied than most other parts of the island. Because of its key strategic position, it has always been militarily important and was the focus of the great rebellion of 1798, the most bloody conflict in modern Irish history.

Nicholas Furlong traces the history of the county from its earliest settlements through its Gaelic, Christian, Norse and Norman phases of life to the turbulence of the Elizabethan and Cromwellian regimes. He brings the reader through the great upheaval of 1798 and the institutional revival of Catholicism in the nineteenth century, which was particularly focused on County Wexford. He details the continued prosperity of the county throughout modern times. Driven by the sporting and cultural revival of the 1950s – the birth of the Wexford Opera Festival and the legendary hurling team of that era – Wexford has today built itself into the nation’s holiday playground and a vital European transport hub.


A History of County Wexford: Table of Contents