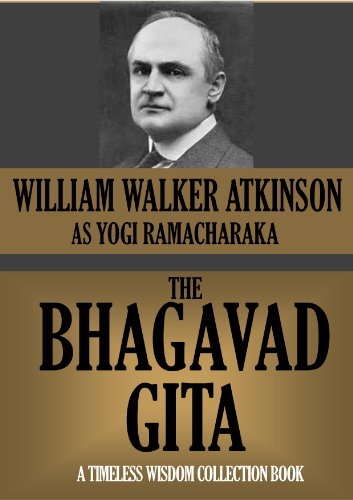 The “Bhagavad Gita,” sometimes called “The Lord’s Lay,” or the “Message of the Master,” is an episode of the great Hindu epic, the Mahabharata, in the Sixth (or “Bhishma”) Parva. It enjoys the highest esteem among the Hindu people, and is constantly quoted there as a great authority regarding doctrine. Its philosophy embodies the prevailing Hindu beliefs, as expounded by the Brahmans, and in its teachings it subtly blends into a harmonious whole the varying points of doctrine of Patanjali, Kapila and of the Vedas. It is supposed to have been written by Vyasa whose personality is veiled in doubt for of the time of his existence in the world no record seems to have been kept.
To the reader who finds in this marvelous dialogue merely the record of a literal conversation dressed up in fancy by the Oriental imagination, the real beauty and purpose of the teaching is lost. But to him who is able to pierce the outer covering, which surrounds all of the great Oriental writings, and find beyond that the esoteric teachings, this poem is one of the grandest that has ever been given the race. One must needs read behind the covering—and between the lines, in order to understand the Bhagavad Gita. No attempt has been made by the compiler of this publication to interpret the inner teachings of the Gita. It has, as the Hindu teachers instruct their pupils, seven texts, each superimposed upon the other, so that each man may read his own lesson from it, according to his plane of unfoldment. Each will get from it that which is fitted to his stage of unfoldment. And each reading will bring to light new beauties, for the mind of the reader will grow with each perusal and soon be prepared for the understanding of higher phases of thought.
There have been a number of English translations of the Gita, from the first effort of Charles Wilkins, in India, in 1785, up to the present time. Some are very good, others indifferent, and others actually misleading and causing confusion. Some of these translations have evidently been made by persons inclining to certain schools of philosophy; and the meaning, as colored by their own philosophical glasses, while most satisfactory to them and their followers, is distracting to those outside the pale, who have had the opportunity of comparing the various editions.
This particular edition, issued by us, is not a new translation, but rather a compilation from the best of the various good translations of Hindu and English translators, some of which are now out of print, or inaccessible to the general public. The compiler has endeavored to give the spirit of the teachings, in a plain, practical, understandable form, adapted to the requirements and needs of the English speaking reader, although such a presentation has often necessitated the sacrifice of any attempt at literary merit. In fact this book makes no claim whatsoever to literary style. It merely seeks to carry the Message contained within its pages, in plain words and simple form, to those who are ready for it.