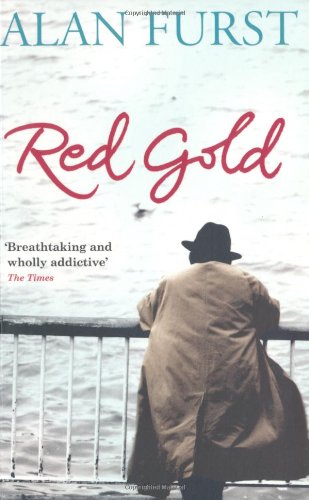 "In the world of the espionage thriller, Alan Furst is in a class of his own."--William Boyd

Paris. Autumn, 1941. In a shabby hotel off the place Clichy, the course of the French resistance is about to change. German tanks are rolling toward Moscow. Stalin has issued a decree: all partisan operatives are to strike behind enemy lines--from Kiev to Brittany.
Set in the back streets of Paris and deep in occupied France, Red Gold moves with quiet and pervasive menace as predators from the dark edge of the war--arms dealers, lawyers, spies, and assassins--emerge from the shadows of the Parisian underworld.
In their midst is Jean Casson, once a producer of gangster films, now living on a few francs a day and hunted by the Gestapo. As the German occupation tightens, Casson is drawn into an ill-fated mission: running guns to combat units of the French Communist party. Their NKVD contact, a former Comintern operative named Weiss--his seventeenth name--begins to orchestrate a series of attacks against the Germans. Reprisals are brutal. Fear spreads through the city. At last the real resistance has begun.
Red Gold masterfully recreates the duplicitous world of the French resistance in the worst days of World War II.