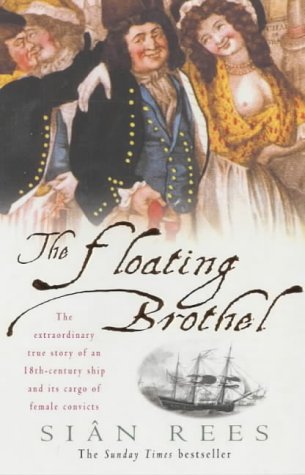 "Winter 1788, London. Outside the royal stables, at the bottom of the Mall ... a 26-year-old Scottish prostitute staked out her space and began her night's work": so begins Sian Rees's fascinating history of the 200-odd women convicts--"disorderly girls"--who, at the very end of the 1780s, found themselves condemned to Transportation to Parts Beyond the Seas. The Floating Brothel is a compelling and readable account of that moment in penal history when transportation from England to the colonies (in this case, New South Wales) was a commonplace alternative to the death sentence. Taking her readers into the squalor of Newgate Prison, and the arcane injustices of the Old Bailey, Rees follows the traces of these women's lives--lives marked by obscurity, loneliness and exploitation as well as the shoddy glamour of 18th-century London. In particular, Rees's account of life on board the Lady Julian--the ship that takes this band of convicts and crew across the world--paints a vivid picture of the complex relations between women destined to become colony "wives" (sexual comforters, breeding banks) and the men charged with delivering this special cargo. "As soon as they were at sea", Rees quotes one of her primary sources, John Nicol, "every man on board took a wife from among the convicts, they nothing loath". One of the strengths of Rees's approach is her refusal to evaluate 18th-century sex and sensibility in terms of modern consciousness. Nevertheless, the everyday trials and passions of her protagonists--notably, the experience of pregnancy and labour on board a convict vessel--comes through this remarkable testimony to forgotten lives. --Vicky Lebeau