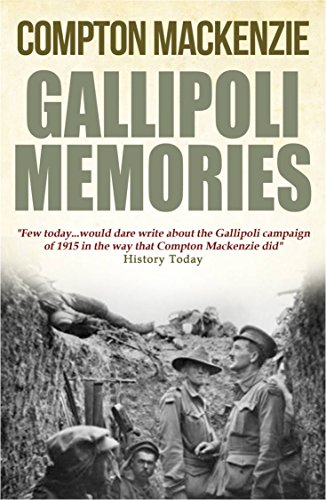 The writer Compton Mackenzie is eager to do his duty to his country and join the army.

But crippled with Sciatica, he knows he will never pass any medical examination.

Disillusioned, he resigns himself to travelling Europe and writing his next book when fate presents an opportunity.

He is offered a Staff Job by Sir Ian Hamilton, Commander-in-Chief of the Mediterranean Expeditionary Force.

He travels immediately to the coasts of the Aegean.

This journey is the beginning of Mackenzie’s experience of the war.

There were few more controversial battles in that epic conflict than the Gallipoli Expedition.

'Gallipoli Memories' throws fresh light on many of the more obscure and unknown issues of that campaign.

Told at first hand by a writer who found fame with books such as Whisky Galore, its provides a fascinating account of the battle, and the bravery of the men who fought it.

Compton Mackenzie was a prolific writer of fiction, biography, histories and memoir, as well as a cultural commentator, raconteur and lifelong Scottish nationalist. He was one of the co-founders in 1928 of the Scottish National Party and was knighted in 1952.