Showing With Santa Anna in Texas: A Personal Narrative of the Revolution by José Enrique de la Peña 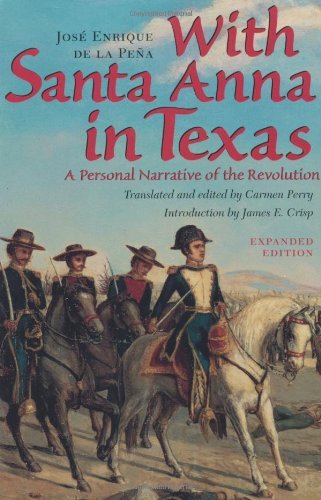 The discovery of an additional week's worth of entries in the diary of José Enrique de la Peña has opened another chapter in the longstanding controversy over the authenticity of the Mexican officer’s account of the Battle of the Alamo.

In this expanded edition of With Santa Anna in Texas, Texas Revolution scholar James E. Crisp, who discovered the new diary entries in an untranslated manuscript version of the journal, discusses the history of the de la Peña diary controversy and presents new evidence in the matter. With the missing week” and the perspective Crisp provides, the diary should prompt a new round of debate over what really happened at the Alamo.

When it was first translated and published in English in 1975 by Carmen Perry, With Santa Anna in Texas unleashed a fury of emotion and an enduring chasm between some scholars and Texans. The journal of de la Peña, an officer on Santa Anna's staff, reported the capture and execution of Davy Crockett and several others and also stated the reason behind Santa Anna's order to make the final assault on Travis and his men. Whether or not scholars agree with de la Peña's assertions, his journal remains one of the most revealing accounts of the Texas Revolution ever to come to light.