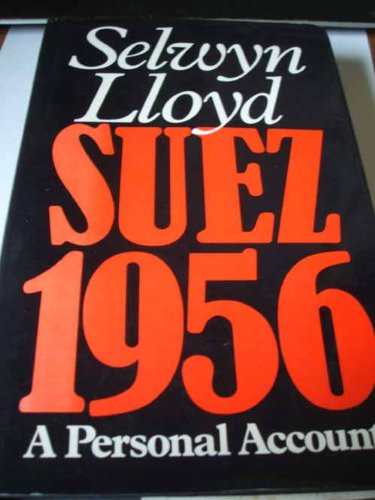 At 5 pm on 29 October, 1956 Israeli tanks stormed into Egypt. The objective was a lightning dash across the heavily fortified Sinai Desert to raise the Egyptian blockade of their only port on the Red Sea and deny Colonel Nasser time in which to build up his Russian armoury and carry out his repeated threat to annihilate the State of Israel. The British and French announced to the world their intention to separate the opposing forces and guarantee freedom of transit through the recently nationalised Suez Canal by the ships of all nations. Air and seaborne troops were landed to secure the Canal but, with just twenty three miles of Canal in hand, Britain and France were ordered out again by a UN Security Council resolution, proposed by the United States, demanding unconditional withdrawal. For almost a quarter of a century since, the Suez affair has been hotly debated. Now a new perspective is added by one of its chief political architects. Selwyn Lloyd believed that, despite the two Arab-Israeli wars since, fought across much of the same territory, the Suez operation lanced an abscess in the Middle East which could have festered into a grave international crisis. His book is in no way an attempt at self-glorification, not does it contend that the British government was right in everything it did. But he argues that Suez afterwards became 'an excuse, a scapegoat for what was happening to Britain in the world, and for all that flowed from her loss of power and economic weakness'. His unequivocal account will be valued for its insight into the struggle as Eden's government saw it.