Showing A Twist at the End by Steven Saylor 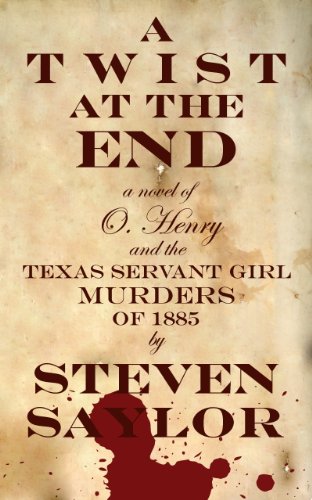 The city of Austin, Texas, “is fearfully dull,” wrote young Will Porter to a friend in the spring of 1885, “except for the frequent raids of the Servant Girl Annihilators, who make things lively in the dead of night.”

Years later, Will Porter would become the most famous writer in America— O. Henry, the toast of New York. The long-ago Austin servant girl murders would remain unsolved. But behind the O. Henry pen name, Will Porter was a man with secrets. The appearance of a merciless blackmailer and a mysterious stranger draw Porter back into the past, and back to Texas, to confront the twisted solution to those murders—and the secrets of his own soul.

When he was a young man in Austin in that spring of 1885, Porter fell in love. Her name was Eula Phillips. She was beautiful. She was married to someone else. And she was doomed to be a victim of the Servant Girl Annihilators.

The first victims were young Black women who worked in the households of Austin's most prominent citizens. The crimes were unspeakable, as the killer or killers used an ax and—in the newspaper parlance of the day—“outraged” the victims even as they were dying or already dead. The authorities were baffled. The murders continued, month after month, until suddenly, shockingly, on a bloody Christmas Eve, the pattern changed—and the trial that resulted would uncover an explosive scandal of sex and power that would tear the city of Austin apart.

The scene of these crimes was a capitol city in uneasy transition. On the wooded hills where outlaw gangs and Comanche Indians recently roamed now stood the grand homes of cattle barons and university professors. The animosities of the Civil War still lingered, and the struggle of Blacks for equality was just beginning. By day, politicians in the state legislature debated equal rights for women; by night, those same politicians mingled with the prostitutes of Guy Town, the city's notorious vice district. Southern manners concealed ugly secrets, all of which would be revealed before the saga of the Servant Girl Annihilators reached its end.

Against this remarkably rich and previously untapped background, Steven Saylor has crafted a novel that melds fact with fiction, employing characters both real and imagined. The crimes and trials described in "A Twist at the End" actually happened, and are described in intricate detail. In real life, no satisfactory resolution was reached. But in the course of investigating the crimes, Saylor has come up with his own startling conclusion to a century-old mystery. The result is a masterful novel of intrigue and murder, yet at the same time a romance of time and place, with a colorful cast of memorable characters brought vividly to life. It's a true tale of Texas, grand in both setting and scope.

“One of the mystery genre’s most inventive writers has turned his considerable talents—and his considerable ambition—to Austin, Texas, in 1885...The result is a worthwhile, engrossing, deftly written novel...Throughout, Saylor brings to bear his remarkable ability to evoke a vanished time.” (Sunday Oregonian)

"Saylor, a veteran of the historical novel, navigates these rapids with confident skill...Better still, in the manner of O. Henry himself, he saves a cunning twist for the end.” (Washington Post Book World)

“Saylor writes with a flawless hand perfectly matched to his story’s time and place." (Austin Chronicle)