Showing The Exception by Christian Jungersen 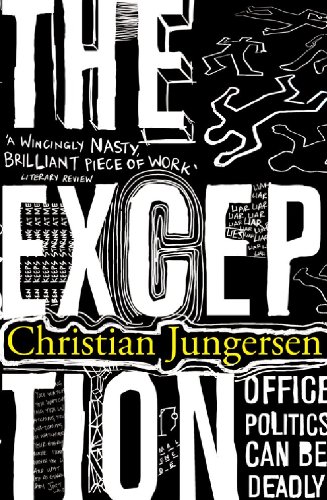 Four women work at the Danish Centre for Genocide Studies. When two of them start receiving death threats, they suspect they are being stalked by Mirko Zigic, a Bosnian torturer and war criminal. But perhaps he is not the person behind the threats - it could be someone in their very midst. Much of the drama created revolves not only around the scary sense of a killer prowling in the shadows but also around the manipulative games being played between the women in the office as they come under pressure and turn on each other.

The irony is that these betrayals and persecutions are taking place amongst professionals who daily analyse cases of appalling cruelty. Now and again, the narrative is broken with extracts from 'articles' dealing with crimes against humanity and the pyschology of evil. Whilst the women apply this to their work with genocide (and the killer), there are parallels to their own behaviour.