Showing My Name is Red by Orhan Pamuk 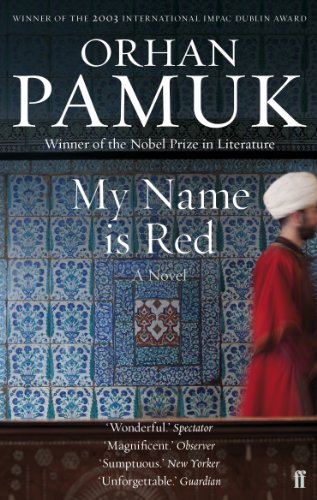 Orhan Pamuk is one of Turkey's premier novelists and My Name Is Red, when published in the original Turkish in 1998, became the fastest-selling book in Turkish history. It is high time then that a translation to English was made, and this publication will be widely welcomed by Pamuk's growing legion of English-speaking admirers.

In the late 16th century, during the final years of the reign of Ottoman Sultan Murat III, a great work is commissioned, a book celebrating the Sultan's life. The work is conducted in secret, to the ignorance of the artists involved, for fear of a violent religious reaction to the European style of the illuminations in the book. An artist goes, missing, feared dead, and Black, a painter who has been in a self-enforced exile because of spurned love, returns to help his former Master investigate the disappearance.

Pamuk's prose is as exquisite and rich as the elucidations it describes. This is a dense, atmospherically fevered book, which demands a high level of patience and attention from the reader, perhaps mirroring the patience of the miniaturists. Written in the first person, with multiple narratives, this is a book full of unreliable witnesses, and as the various stories of the narrators unfold, the truth of the disappearance slowly emerges. The sense of place and time are carefully constructed and diligently maintained throughout the novel, which, like Umberto Eco's The Name Of The Rose, far exceeds the genre of literary historical crime to become a hypnotic meditation on religion, love, time, patience and artistic devotion. --Iain Robinson