Showing This Is Serbia Calling: Rock and Roll Radio and Belgrade’s Underground Resistance by Matthew Collin 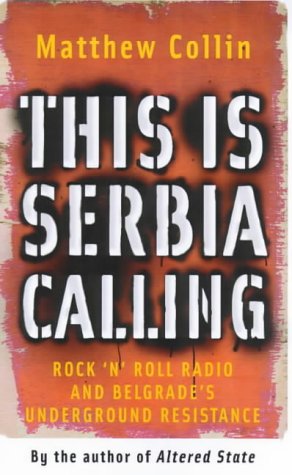 This is Serbia Calling is a fascinating portrait of how Serbia's "lost generation" expressed their resistance through the few channels left open to them. B92, an avant-garde Belgrade radio station run by a motley, courageous group of enthusiasts, provided a focus for young people who had "grown up thinking things were about to get better but had seen them get much, much worse".

War has come to rely heavily upon control of the media and the Balkans were were no exception. "Turbo folk", a tacky hybrid of Euro-pop and Serbian folk songs, emerged as the soundtrack to nationalism. Brash and corny, its young stars dated gangster politicians and filled the screens of the state-controlled TV stations. Just as symbolically, rock and roll, techno and rap joined the soundtrack for the resistance. In a country gripped by madness, young people alienated by ethnic hatred clutched at B92's anarchic broadcasts. In such brutal times, B92 was a lifeline--proof there were others out there too. In describing so much musical common ground, Matthew Collin, author of the successful history of British dance culture Altered State, conveys all the more powerfully the full bewildering horror of Serbia's disintegration. In this context, the familiar, from gangsta-style to ecstasy culture to absurdist satire, takes on new layers of depth and meaning. Vivid and moving, This Is Serbia Calling brings across the power of music to stave off despair and the terrible shame of how Europe ignored and betrayed Yugoslavia for so long. --Rebecca Johnson.