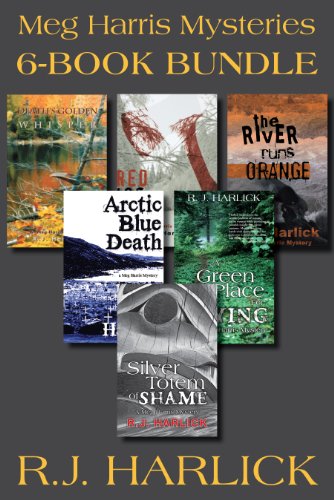 In one volume for the first time, this bundle presents the first five novels of the Meg Harris Mystery series by R.J. Harlick. Meg Harris, an amateur sleuth who drinks a little too much and is afraid of the dark, finds herself confronting an underside of life she would rather not know existed.

A Green Place for Dying - A Meg Harris Mystery #5

A friend of Harris's has been missing for over two months, but she's not the only one ...

In search of the truth behind her father's disappearance when she was a child, Meg travels to Iqaluit to investigate and is sucked into the world of Inuit art forgery.

Meg Harris discovers the skull and bones of a woman whose very existence takes the archaeological world by storm. But when her neighbours, the Migiskan Algonquin, declare their rights to the ancient remains, Meg becomes embroiled in a fight that pits ancient beliefs against modern ones and leads eventually to murder.

Red Ice for a Shroud - A Meg Harris Mystery #2

A young Quebecoise sneaks off to meet her Algonquin lover in an isolated hunting camp on the Migiskan Reserve. Five days later, Meg Harris discovers her frozen and brutalized body.

Meg Harris believes there are fishermen on the isolated northern lake she lives on. Within hours, she discovers that these men have come to develop a gold mine. She combines forces with Eric Odjik, chief of the neighbouring Migiskan Reserve, to fight the mining company.

Watch for the next book in the Meg Harris Mystery series, Silver Totem of Shame, coming in May 2014.