Showing An Audience of Chairs by Joan Clark 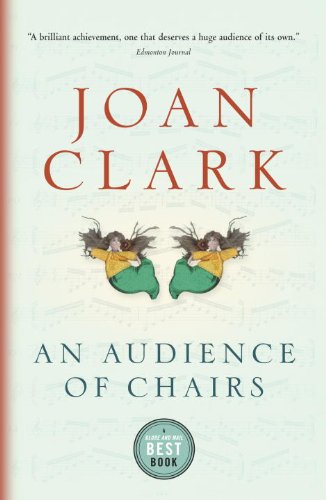 Joan Clark’s An Audience of Chairs opens with Moranna MacKenzie living alone in her ancestral Cape Breton farmhouse, waging a war with the symptoms of bipolar disorder and grieving the loss of her two daughters, taken from her over thirty years previously. There are few people remaining in her life, as Moranna cannot help but tax the patience of nearly everyone she encounters. Her long-suffering brother Murdoch has her best interests at heart, though he is fatigued by her enormous needs and pressured by his ambitious wife to invest less time in her. Pastor Andy politely sloughs off the peculiarly intelligent yet unpalatable sermons Moranna pens for him. Her neighbour Lottie knows what it is to be an eccentric and can be counted on to come through in a pinch. The local RCMP constabulary smooths over her legal scrapes. And her lover Bun, who lives with her when not working on the ferries between Cape Breton and Newfoundland, knows how to give her a wide berth on her “foul weather” days. Thanks to the assistance of these sometimes reluctant guardian angels, as well as to the carefully planned inheritance left by her father (not to mention her own sheer ingenuity), Moranna has managed to get by all these years despite small-town gossips and tormenting youths.

Through a series of flashbacks, we learn more about the devastating effects of Moranna’ s mental illness on her life and that of her family. But An Audience of Chairs also gives us a glimpse into the mind of a true iconoclast and wild spirit, who has managed despite overwhelming odds to keep hope alive.

Of An Audience of Chairs, Quill and Quire said: “Elegantly written and deeply grounded in place, this moving, compassionate novel is far more than a story of mental illness. Moranna’s quest is for peace, joy, and connection–the same yearnings that drive us all.”