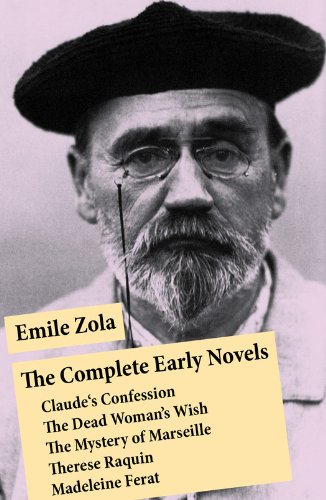 This carefully crafted ebook: “The Complete Early Novels: Claude's Confession + The Dead Woman’s Wish + The Mystery of Marseille + Therese Raquin + Madeleine Ferat” contains 5 books in one volume and is formatted for your eReader with a functional and detailed table of contents.

The Mystery Of Marseille

La Confession de Claudewas Emile Zola's first novel and his first attempt at what he would later call an "Experimental Novel".Published in Paris in 1865, it was quickly banned in the United States and Great Britain and was not translated into English for several decades.

The Dead Woman’s Wish was first published in 1902. It tells the story of a youngorphanDaniel, sponsored by Madame de Rionne who is on her death bed.


The Mystery of Marseille

A novelLes Mystères de Marseille appeared as a serialized story in 1867. "The Mysteries Marseille" recounts the love of Philippe Cayol, poor, untitled, republican, and of young Blanche de Cazalis, the niece of De Cazalis, a millionaire, politician and all-powerful in Marseille. Philippe's brother, Marius, devotes himself to protecting the two lovers - and the child Blanche gave birth to before entering a convent - from the anger of De Cazalis.

Thérèse Raquinis the title of a novelfirst published in 1867 and a play first performed in 1873. It tells the story of a young woman Thérèse and her lover, Laurent, murder her husband, Camille, but are pursued by guilt in the form of vivid hallucinations. One particularly intense passage describes Laurent's visits to the morgue in search of Camille's corpse.

Madeleine Fératintroduced what was to become one of Zola's central preoccupations, the question of heredity. First published in 1868, centred around the belief that a woman's children would bear a physical resemblance to her first lover, regardless of who the actual father was. This theory owed more to the cult of female fidelity than to any 'scientific' knowledge. Yet Zola's ideas were not absurd in terms of current scientific thinking; in 1869 he received a letter from the future professor of zoology at the University of Marseilles, congratulating him on the novel.


ÉmileZola (1840 – 1902), French novelist, critic, and political activist who was the most prominent French...