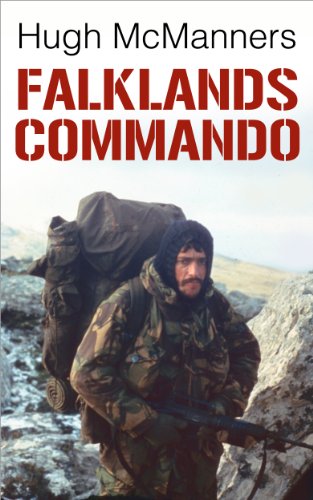 Captain Hugh McManners went in on the first British Special Forces combat mission to land on East Falkland, in preparation for the Royal Navy landings on the Islands. His mission was to prevent an Argentine heavy weapons company guarding the entrance to the Task Force’s intended harbour area from attacking the ships.

The gripping narrative is Hugh’s first-hand account of this most famous of modern British military operations. His position made him part of the planning of this operation as well as one of the field operators – a unique perspective. Hugh describes, with perception and an often a wry sense of humour, life in his five-man Special Forces team, fighting with the Special Boat Squadron.

After near-disastrous small boat ops in heavy seas, gruelling long clearance reconnaissance missions, and tense night helicopter insertions, Hugh’s team finish up on their own, concealed while surrounded by enemy troops, twenty kilometres behind enemy lines. From this very exposed position, they carry out night-firing missions using naval gunships, to destroy Argentine artillery guns, missiles and radars. These targets must be destroyed before the enemy can use them to sink ships, or stop the British Commandos and Paras as they consolidate in the mountains ready for the final set-piece battle.

Then, as the British artillery comes within range, McManners’ team also fire by day. This proves critical, as the Paras and Commandos are heavily shelled while fighting their way into the Argentines’ defensive ring of steel.

This new ebook edition includes a new 2014 introduction, plus the Introductions from each of the three earlier editions, from 1984, 1987 and 2002. These reveal the failures of the British Ministry of Defence post-Falklands and then in the first Gulf War.

From readers' reviews of the book:

"...has to be the definitive work on soldiering in the Falklands War, by a rather unusual soldier."

"With more than a little understated humor and much fascinating personal detail, McManners describes the operations ashore, as his team leap-frogged across the islands, calling in naval gunfire in support of special operations forces."

"Falklands Commando has plenty to offer in the way of lessons learned for war on an austere budget in a remote location. It is highly recommended to students of expeditionary warfare."