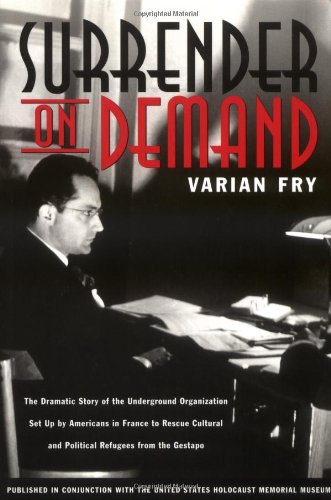 Like Oskar Schindler and Raoul Wallenberg, Varian Fry risked his life to rescue those targeted by the Gestapo in "the most gigantic man-trap in history." Now, more than fifty years later, the story of this neglected American hero is back in print.

Varian Fry, a young editor from New York, traveled to Marseilles after Germany defeated France in the summer of 1940. As the representative of the Emergency Rescue Committee, a private American relief organization, he offered aid and advice to refugees who found themselves threatened with extradition to Nazi Germany under Article 19 of the Franco-German armistice—the "Surrender on Demand" clause.

Working day and night in opposition to French and even American authorities, Fry assembled an unlikely band of associates and built an elaborate rescue network. By the time Fry left France after 13 months, he and his colleagues had managed to spirit more than 1,500 people from France, among them some of Europe’s most prominent politicians, artists, writers, scientists, and musicians. Their arrival in the United States significantly expanded the intellectual exodus from Europe that began when Hitler came to power, and permanently changed the face of American culture.